The federation feature should be considered a security backdoor and enabled or disabled as appropriate for your installation.

Please review all the documentation to understand how it works and its limitations. 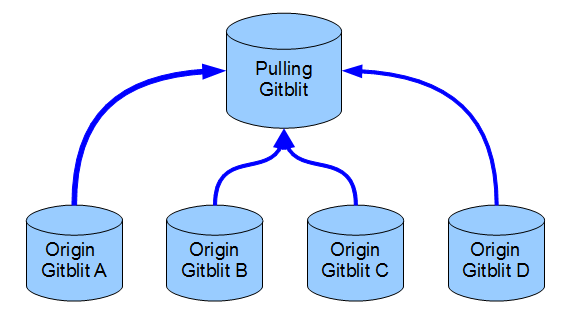 Gitblit 0.6.0 uses the default google-gson timestamp serializer which generates locally formatted timestamps. Unfortunately, this creates problems for distributed repositories and distributed developers. Gitblit 0.7.0 corrects this error by serializing dates to the iso8601 standard. As a result 0.7.0 is not compatible with 0.6.0. A partial backwards-compatibility fallback was considered but it would only work one direction and since the federation mechanism is bidirectional it was not implemented.

The passphrase is used to generate permission tokens that can be shared with other Gitblit instances.

The passphrase value never needs to be shared, although if you give another Gitblit instance the ALL federation token then your passphrase will be transferred/backed-up along with all other server settings.

This value can be anything you want: an integer, a sentence, an haiku, etc. You should probably keep the passphrase simple and use standard Latin characters to prevent Java properties file encoding errors. The tokens generated from this value are affected by case, so consider this value CASE-SENSITIVE.

The federation feature is completely disabled if your passphrase value is empty.

NOTE:
Changing your federation.passphrase will break any registrations you have established with other Gitblit instances.

Controlling What Gets Pulled

Individual Gitblit repository configurations such as description and accessRestriction are always mirrored.

If federation.passphrase has a non-empty value, the federation tokens are displayed in the log file and are visible, to administrators, in the web ui.

The three standard tokens grant access to ALL your non-excluded repositories. However, if you only want to specify different groups of repositories to be federated then you need to define federation sets.

Once you have properly setup your passphrase and can see your federation tokens, you are ready to share them with a pulling Gitblit instance.

The registration process can be partially automated by sending a federation proposal to the pulling Gitblit instance.
To send a proposal:

Not all Gitblit instances accept federation proposals, there is a setting which allows Gitblit to outright reject them. In this case an email or instant message to the administrator of the other Gitblit instance is required. :)

Submitting a proposal does not automatically register your server with the pulling Gitblit instance.
Registration is a manual process for an administrator.

If your Giblit instance has received a federation proposal, you will be alerted to that information the next time you login to Gitblit as an administrator.

You may view the details of a proposal by scrolling down to the bottom of the repositories page and selecting a proposal. Sample registration settings will be generated for you that you may copy & paste into either your gitblit.properties file or your web.xml file.

You may exclude a repository from being pulled by any federated Gitblit instance by setting its federation strategy to EXCLUDE in the repository's settings page.

Below the repositories list on the repositories page you will find a section named federation registrations. This section enumerates the other gitblit servers you have configured to periodically pull. The status of the latest pull will be indicated on the left with a colored circle, similar to the status of an executed unit test or Hudson/Jenkins build. You can drill into the details of the registration to view the status of the last pull from each repository available from that origin Gitblit instance. Additionally, you can specify the federation.N.notifyOnError=true flag, to be alerted via email of regressive status changes to individual registrations.

How does it work? (Origin Gitblit Instances)

The federation process executes using an internal administrator account, $gitblit. All the normal authentication and authorization processes are used for federation requests. For example, Git commands are authenticated as $gitblit / token.

While the $gitblit account has access to all repositories, server settings, and user accounts, it is prohibited from accessing the web ui and it is disabled if federation.passphrase is empty.

How does it work? (Pulling Gitblit Instances)

During a federated pull operation, Gitblit does check that the origin of the local repository starts with the url of the federation registration.
If they do not match, the repository is skipped and this is indicated in the log.

By default all user accounts and teams (except the admin account) are automatically pulled when using the ALL token or the USERS_AND_REPOSITORIES token. You may exclude a user account from being pulled by a federated Gitblit instance by checking exclude from federation in the edit user page.

The pulling Gitblit instance will store a registration-specific users.conf file for the pulled user accounts and their repository permissions. This file is stored in the federation.N.folder folder.

If you specify federation.N.mergeAccounts=true, then the user accounts and team definitions from the origin Gitblit instance will be integrated into the users.conf file of your Gitblit instance and allow sign-on of those users.

Server settings are only pulled when using the ALL token.

The pulling Gitblit instance will store a registration-specific gitblit.properties file for all pulled settings. This file is stored in the federation.N.folder folder.

These settings are unused by the pulling Gitblit instance.

Your Groovy push scripts are only pulled when using the ALL token.

The pulling Gitblit instance will retrieve any referenced (i.e. used) push script and store it locally as registration_scriptName.groovy in the federation.N.folder folder.

These scripts are unused by the pulling Gitblit instance.

Gitblit does not detect conflict and it does not offer conflict resolution of repositories, users, teams, or settings.

By default, federated repositories can not be pushed to, they are read-only by the isFrozen flag. This flag is ONLY enforced by Gitblit's JGit servlet. If you push to a federated repository after resetting the isFrozen flag or via some other Git access technique then you may break Gitblit's ability to continue pulling from the origin repository. If you are only pushing to a local branch then you might be safe.

These examples would be entered into the gitblit.properties file of the pulling gitblit instance.

This assumes that the token is the ALL token from the origin gitblit instance.

This example is considered nearly perfect because while the origin Gitblit's server settings & push scripts are pulled and saved locally, they are not merged with your server settings so its not a true mirror.

This assumes that the token is the REPOSITORIES token from the origin gitblit instance.
The repositories will be put in git.repositoriesFolder/example2.

This assumes that the token is the REPOSITORIES token from the origin gitblit instance.
The repositories will be put in git.repositoriesFolder/example3.

This assumes that the token is the REPOSITORIES token from the origin gitblit instance.
The repositories will be put in git.repositoriesFolder/example4.

The federation client relies on many of the same dependencies as Gitblit and will download them on first execution.

You may use the federation.properties file to configure one or more Gitblit instances that you want to pull from. This file is a subset of the standard gitblit.properties file.

By default this tool does not daemonize itself; it executes and then quits. This allows you to use the native scheduling feature of your OS. Of course, if you'd rather use Gitblit's scheduler you may use that by specifying the --daemon parameter.

If you are pulling from a Gitblit with a self-signed SSL certificate you will need to configure Git/JGit to bypass certificate verification.
(Git-Config Manual Page)

Instead of using federation.properties you may directly specify a Gitblit instance to pull from with command-line parameters.